Some customers talk to us

David and I felt we would like to write and thank you and the team for the work carried out at our property.

When you visited us to supply us with a quote for a Guardian WarmRoof System, you had a professional attitude, along with a genuine, warm and friendly approach.

We were happy to give the work to 'HeatGuard'.

Our work was progressing, there were a few minor issues and we are pleased to say, the issues were resolved and rectified without delay. Nothing was too much trouble for the team.

They were all a pleasure to have working at our home.

We shall not hesitate to recommend your comapny in the near future. 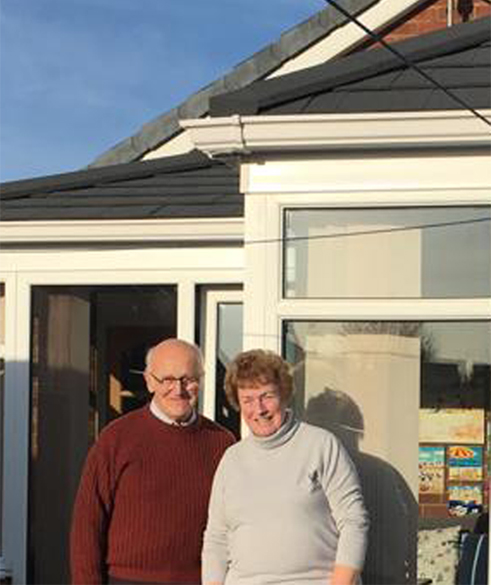 They were so happy with their new Guardian WarmRoof, not only did they let us use their picture on our website and write this lovely letter... they also made us a video!

The 'Company who care', is certainly true and the saying, 'If a jobs worth doing, its worth doing well', also applies to Mark and HeatGuard Windows!

We approached three window companies with a view to obtaining quotations for a new conservatory roof.
The previous roof was about 20 years old and was no longer fit for purpose, as it made the room unbearably warm in summer and simply freezing in winter. Having seen two of the companies, one of which was a nationwide business, we spoke to Mark Eales of HeatGuard Windows.

Having prepared and posed numerous questions to the other sales people, we presented Mark with the same queries. It soon became apparent that Mark was head and shoulders above the rest. The fact that Mark is the general manager as well as the principal sales person shines through immediately. He answered all the questions effortlessly and confidently and had all the knowledge at his fingertips. 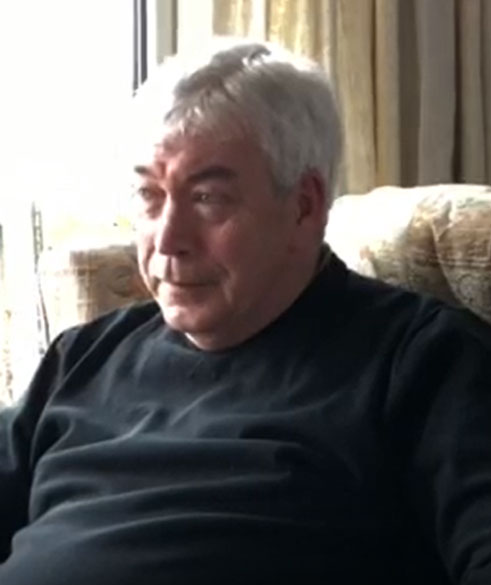 Mr Christian was so delighted with his new Guardian WarmRoof, not only did he let us use his picture on our website, he agreed to an interview on video!

You can also view the full letter in PDF format

''Having experienced a few winters in our conservatory, where it was necessary to have thermal curtains and at least a couple of layers of clothing, we decided it was time for a change.
The old polycarbonate roof and standard glazing made the room freezing in winter and stiflingly hot in summer.
We also wanted the windows in our living room changing for the very same reason. Having been recommended HeatGuard Windows by our friends, we contacted them with a view to solving these problems.
Mark from HeatGuard duly arrived, and we were immediately impressed by his relaxed, assured manner, product knowledge and vision for the two rooms. It didn’t feel as if we were dealing with a salesman, just someone, who was genuinely interested in providing us with the best possible solution at the most effective price. 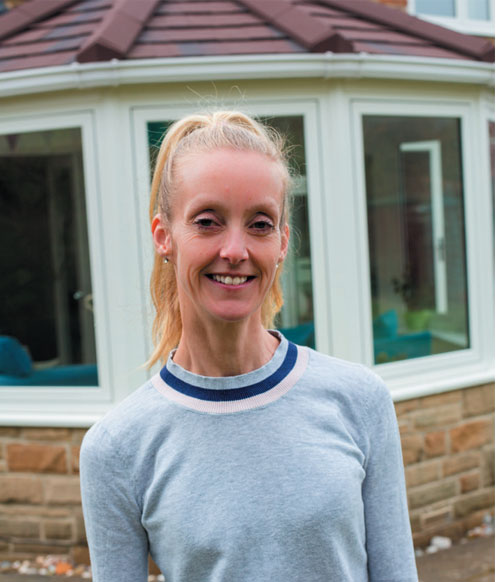 Mr & Mrs Staniland were so delighted with the new windows and Guardian Warmroof, not only did Mrs Staniland allow us use her picture, she agreed to an interview on video!;

To his credit, Mark came up with ideas, which were less expensive than what we had originally planned to sign up for.
This just shows how genuine he is. At first, we have to admit that we were apprehensive about Mark’s suggestions, but he gradually put our minds at rest, so positive was he about his plans for the rooms and their eventual effectiveness.

With Mark's gentle assistance, we opted for the Guardian WarmRoof system and triple glazing throughout. The windows were to be full length and different to the previous ones, which had top openers. This meant that each one would be a picture window.
As far as the living room is concerned, we were originally looking at bi-folds and double doors in the middle, but Mark's suggestion would enable the doors to fold flat and let more light in. The existing bay window was to be converted into full-length patio doors and windows.

By now we were fully confident in Mark's plans and agreed to them straight away. The builders were excellent; tidy and polite with meticulous attention to detail. I don’t know how they managed it, but they replaced the roof in the conservatory first and then did the windows and patio doors afterwards. They also blocked up a hole where a door had previously been in a manner that was so seamless that you would never believe that there had been one there in the first place!; When the job was complete, we definitely experienced a 'wow' moment. The finished product was truly amazing.

The results bear testimony to Mark's vision and the excellence of product and fitting. The rooms are now an ambient temperature all year round; there is a lot more light, far better views, and, with the triple glazing, it's so peaceful and quiet! We couldn’t possibly be any happier! We were so impressed with Mark and the fitters that we have used HeatGuard Windows again to install picture windows in the master bedroom. The result: Perfection, of course!
We have no hesitation in recommending HeatGuard Windows to anyone. Excellence comes as standard!;''

Some review us on

Excellent quality windows and customer service, nothing too much trouble.
My windows look fantastic, I would definitely recommend heatGuard

Most review us as Trusted Traders

So far, we have nearly 500 reviews, as Trusted Traders, we are rated with 5

We are highly delighted with all aspects of Heatguard Windows from the measuring up to the final fitting. We also had a stained bevel which needed matching to our original and the replacement was excellent, you could not tell the difference. Well done team.

I have read Heatguard's reviews on more than one occasion, and am still waiting for a bad one! I have just used this company again, this time for replacement French doors, and cannot fault the service provided by this company. From Mark initial contact as Senior Management, through to all staff on telephone, survey, and installation - Friendly, exceptionally knowledgeable and capable. I would recommend this company to anyone and everyone - superb quality of service and products.

I would like to praise Heatguard for their attitude and professionalism in my need to have the work completed in a comparatively short time. They completed the work to my satisfaction in a diligent and professional way. I would not hesitate to use the company for further needs.

We decided to use Heatguard Windows to fit our new porch after we'd been let down by another tradesperson. Heatguard's service couldn't have been better. From our first enquiry through to fitting, it was a prompt, efficient, totally first class service. Top marks Heatguard.